"This above all: to thine own self be true, and it must follow, as the night the day, thou canst not then be false to any man." ~William Shakespeare

It was the fall of 2012, I found the courage to tell my story.  I knew the day would come where I would have to either face my fears, or be ruled by them. If I am to be true to myself and others, I had to become transparent. That meant letting go of my fears, and humbling myself under the sight of God and others.  After years of low self-esteem, I'd finally arrived at a place of self love and acceptance. Being able to show and tell the world, "This is me, take it or leave it". Being okay with either reaction is true freedom. 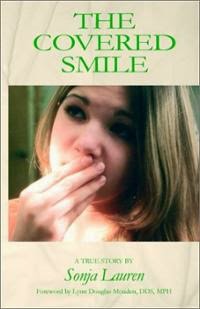 During the first semester of my dental assisting program, the instructors asked us to share our story. At the end of class, a former classmate came to me and said after hearing my dental experience, she was reminded of another.  And referred to a book she'd read entitled, The Covered Smile (autobiography of Sonja Lauren). Honestly, that was my first time hearing of the book. She brought to class the next day and suggested I read it. I did, and like her I found it to be a must read for all dental students and professionals. The fact that Sonja survived such incredible circumstances, yet found the courage to tell the story, and ultimately turn her pain into a gain was inspiring.  Unlike Sonja, the lack of oral healthcare I received was not the result of child abuse. However, my oral healthcare issues were due to another pressing concern. The sheer lack of knowledge, wealth, and resources...

"About 37 percent of poor children 2 to 9 years old have one or more untreated decayed baby teeth, compared with 17.3 percent of higher-income children, according to a report released by the U.S. surgeon general. Low-income children are less likely to receive regular dental care, and the cavities are more likely to go unfilled.“They’re more likely to have the more-severe forms of the disease,” said Dr. Susan Fisher-Owens, a pediatrician and children’s health researcher at the University of California-San Francisco (Columbus Dispatch, 2012)."

In general, the latter seems to be the underlying factor in either case. Likewise, in either case pediatric dental disease can cause long-term physical and socioeconomic impact if not properly addressed. Early childhood caries (ECC), toothaches, and other oral/health related issues (such as missing school days, poor concentration/grades, and low self-esteem) are often experienced by children from low income families. Millions of adults and children cover their smile (literally) and the pain (figuratively) due to all manner of situations. The statistics are alarming and for many dental health professionals, it's implicitly the reason why we do what we do. The good news is, pediatric dental disease is preventable.

"Responding to the need to dramatically increase oral health literacy and access to preventive and restorative care among underserved populations, the ADA in 2006 launched a pilot project to produce community health workers whose training focuses on oral health. These Community Dental Health Coordinators (CDHCs) work in underserved rural, urban and Native American communities, bringing more people into the oral health system. As of Fall 2013, the CDHC project has graduated 34 students who are now serving in 26 communities in seven states: Arizona, California, Montana, New Mexico, Oklahoma and Wisconsin (American Dental Association)."

Furthermore, organizations such as the National Children's Oral Health Foundation (affectionately known as America's ToothFairy), provide "programs and comprehensive resources to deliver community-based critical preventative, educational and treatment services" for under served children and their families throughout the United States and Canada. The NCOHF also provide oral health education and care to expectant mothers, to help combat pediatric dental disease at the prenatal level. The organization's affiliate network of non-profit community programs continually support the initiative by "creating a powerful, united effort to eliminate tooth decay and protect the smiles of our most vulnerable children." There's an old saying, "It takes a village to raise a child." In other words, although organizations like the NCOHF are making strides to prevent stories like Sonja's, none of it would be possible without our combined efforts as a community. It's the volunteers, your donations, and our willingness to fight for humanity.

Yes, we all have a story...and may it end in triumph.
Reactions:

Dedicated to my family who inspire me daily - and the late Dr. Ida Gray Nelson Rollins.

Cherie
Hi there, welcome to my dental health blog! I'm Cherie, I work as a dental assistant in a community health program where we provide support and resources to under served populations - particularly children, pregnant women, the disabled and elderly. To that end, I created Tooth Faerie Cherie as another way to engage the public on the topic of dental health in a lighthearted but meaningful way! *This blog is no longer active.